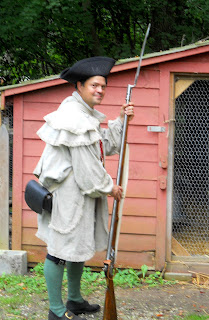 The cause of death of General Enoch Poor has almost from the start been the subject of rumor and speculation. Most contemporary sources and academic scholars support the official version that he took sick in late August, 1780 and died of typhus or putrid fever.  The alternative hypothesis claims there was a massive cover up and the general was actually mortally wounded in an illegal duel with either a French officer or one of his subordinates.


Constant Belcher's regiment had recently been assigned to a new Brigade of Light Infantry under General Poor in the Marquis de Lafayette's division, so it is with great interest that Larry and I examined his journal entries for this period. We were as astonished to find that Belcher has his own version of events that not only turns all prior theories on their heads, but also makes tantalizing reference to the complicity of a "Sgt.of the Sappers & Miners" who it is tempting to speculate may have been Private Yankee Doodle himself, Joseph Plumb Martin,  the most famous enlisted man diarist of the Revolution.  Of course, there is no definitive proof it was he, as there were other Sergeants in this small unit present with Washington's Army at this time.  His own Journal is silent on the matter of the death of General Poor.

Also of interest, though of a much less scandalous nature, Belcher makes reference in these excerpts to what he calls variously "heathens", "Heath Cocks" and "Cedar Patridges" : all names for the now extinct Heath Hen.  His complaints about the lack of meat rations are supported almost word for word by the letters of George Washington during this same period.  One wonders if Belcher in his capacity as waiter to Jersey Brigade Major Aaron Ogden might have had access to any of  Washington's correspondence.
Sept 3rd  [1780]  To day clowdy & warm / Had only fire-cake an water / Yesterday was last of ye salt beef & Still feeling its effects.


Sept 4th                 Cool with fog patches / Receivd Flower ration only / The whole Army will be again this day without Meat.
Sept 5th                 Very hot / For Sev’ral days now on Short allowance / Genl orders against plundering inhabitants of Bergen tho for ye most part inveterate Tories & unfriendly to Congress / Our situation most DEPLORABLE in respect to meat / Did hear Sgt. of sappers & Miners saw Cedar patridges or Heathens whilst a-cutting fascines in ye sprout land beyond Camp /   Resolvd to go a-fowlin’.
Sept 6th                 This morning before day Brake & in Grate want of belly timber did take up my firelock loadd with small shot only & left Camp to seek ye Heathcock / As our rigiment now Traind  as Lt. infantry, advanced  smartly into thicket in open order / Fancied I herd ye fowl a-drummin ahead & saw its plumage behind a low bush /  By some mischance there being a prodigious myst my firelock fail’d to spark but much surprised when Some body from another quarter made his full discharge / Saw that same Sgt. of Sappers & miners also after fowls/  Thot he Lookd most smugg at stealin a march on me but he did return directly with doleful count’nance / Had in hand not a bird for ye Pot but an officer’s Cap with red & black plume of ye Marquee’s Corpes of Light Inf.  / Did drop cap when saw me & showed his heels/ Made a reconnaissance / Discoverd not a patridge of ye Heath but a Genl officer on his face having stept into ye bushes as I suppose to ease himself /  Disinclind to make further acquaintance so cannot say if he yet lived or no /  Thought best not to be discoverd in vicinity & took Roundabout way back to Camp / Rest of this day trying not to be Seen /
Sept 7th                 This day Gen’l Poor of our Brigade said by some to be sick abed in his Marquis.   Sgts. of Sappers & Miners scarce as hens in our Camp.   For all ‘tis sport to have ye Engineer Hoist with his own partrig, yet Felt most unwell under some misprision of Treason.
Sept 8th                 This night had word that Gen’l Poor is dead from the putrid feavor.  Rumor in camp Gen’l receivd mortal hurt in secret duel with French officer but cannot speak to ye Truth of it. 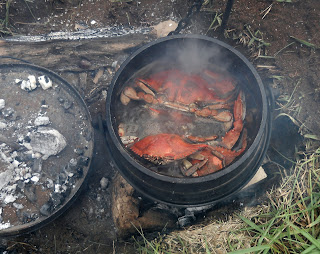