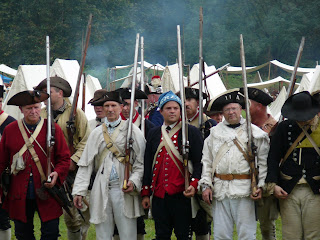 There is very limited documentation for the uniform of the 1st NJ Regiment (2nd Establishment) of the Continental Line in 1777.  Historian John Rees has done more research on this topic than anyone else, and according to him; "There is no information available for the 1st...Jersey Regiment...concerning the colors of any regimental coats worn by the soldiers during 1777. No deserter descriptions survive for the 1st New Jersey for 1777".  Rees deduces based on returns of clothing issued by the Clothier General that the 1st Regiment received 408 uniform coats issued "probably in June" [1777], but whether these were blue faced with red as with the 3rd Regiment or in other cuts and colors has not up to now been established in the surviving historical record.

The Belcher Journal, however, indicates that at least one company received uniform coats of blue and red cloth through the efforts of Paymaster Lieutenant Aaron Ogden and his dogsbody, Constant Belcher, although with unintended consequences. 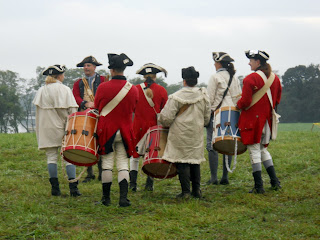