Constant Belcher and Sally Wister [May 1778]

The Diary of Sally Wister, a delightful 18-year-old Quaker girl who wrote with endearing charm and excitement about the comings and goings of gentlemen in uniform during the period that the Continental Army was at Valley Forge, is well known to scholars of the period.  Less well known is that Constant Belcher was among the callers noted in her diary on May 11th, 1778, in which she described Maj Aaron Ogden as genteel, with an Aquiline nose, but positively gushed over the Virginian Captain Cadwallader Jones.  Belcher's version contains elements of the visit that it seems Miss Wister out of delicacy declined to record.


May 10th 1778       Maj. Ogden come a crupper over the Wister girl /  Camp gospel discovers the Quaker lass a notorious flirt but Cozen Aaron will hear none of it / Grater than he have overcast on that shore without prospect of filling her oyster basket / Brigade now on the March to Germain Town wair Miss Wister abides and the Maj. of much a mind to go a-sparking. 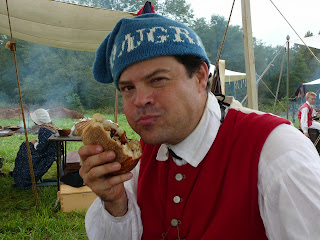 May 11th                Mount’d To day a sory creatur fit only for Cozen Matthias’  tanyard back in Eliza. Town / Came ahead in van with Genl Maxwell, Maj. Ogden, Col. Brodhead just back from the Ohio Country, & Capt. C[adwallader] Jones, a southern Macaroni /  Stopt by Germain Town to dine with Wister & his brood /  Found thair also at table a Dr Moar /  Maj Ogden much incommoded by Capt. Jones attending the Mistress Wister / Seems much aswoon with him /  I deem her a flighty bird not easily caught in hand /  The prime piece is their girl Nelly, a likely battle hammed lass.  Took our dinner of journey cake and gammon in the Kitchen - put her through her paces between courses.   By some accident a gallipot of blackroot from the Doct’s bag fell into the Captain’s portion in consequence had copious puking at table /  Capt. J. much mortified and discomfit’d /  Had bottle of port that night from Maj. Ogden.”
Posted by Tim Abbott at 3:19 PM