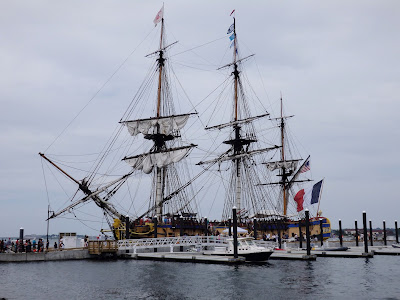 The transatlantic visit of the recreated French frigate "L'Hermione" has been one of the highlights of the 18th century reenacting season in North America this year.  A project 18 years and 30 million dollars in the making, this carefully reconstructed vessel represents the warship that brought Marie-Joseph Paul Yves Roch Gilbert du Motier de Lafayette, Marquis de Lafayette, back to the war in America from France.  The "Boy General" arrived in Boston on April 27th, 1780, informing Washington by letter with a cheerfully guileless; "Here I am."

By the time Washington got wind of it, Lafayette was well on his way overland to join the American commander at Morristown, New Jersey, where the main force of the Continental Army had just endured the worst winter of the century.  Washington dispatched the head of his Life Guard, Major Caleb Gibbs, to escort the Marquis from nearby Pompton, and the two generals were reunited on May 10th.

Lafayette brought word that his King had agreed to send a force of more than 5,000 troops and six ships of the line to aid the American war effort.  He also brought gifts of swords and plumes for the officers and men of a new Light Infantry Division over which he was to assume command that August.  Four companies of the 1st New Jersey Regiment, commanded by Colonel Matthias Ogden, formed part of this Light Division, and we know from a previously deciphered passage from the Belcher Journal - The Death of General Poor -that Belcher was also among the Jerseymen in Lafayette's Lights.

At the time of Lafayette's arrival in Morristown, however, Belcher was still serving as waiter to Colonel Ogden's brother Aaron who was then Brigade-Major to General Maxwell.  Nonetheless, this most recently transcribed section of the Belcher Journal reveals a hitherto unsuspected connection not only to the Lights, but to the frigate "L'Hermione", and a brief interlude of unintended service under the fleur de lys.

"11th May [1780] This Day Majr. [Aaron] Ogden had nous that Gen'l Fayette arriv'd from Frogland  aboard ye Fregatt 'Herr Minion' - doubtless by her Dutchie name 'Tis some Hessian vessl taken by our French alloy  - Such was his Haste to be secure in his Excellency's vambrace that ye Markey did arrive a-head of his dunnage & divers articles for Light Division still abort 'Hair Mignon' at Beantown / Colo. [Matthias] Ogden ingrate Agitation lest ye wicked ways of ye Bostonaise result in Malapropriation of divers Plumage & espontoonage indented for Jarzy Gentlemen  & upon that head fools such as we must fech 'n carry - Perforce Majr. Ogden does dispatch me post Haste to ye Eastward to forstall unhappy misalliance of Yankey Doodles calling our Garlic gifts Macaroni.

12th May - As ye Post Road that does pass nigh Kings Bridge through the Neutral Ground is restrict'd for what cause I know not by ye Gouvenor of Jarzy to but One lane only did think best not to affect Passage by land / Accordingly am considerin' a-shipping up to Boston, whoa, as Supercargo in a Snauw & pray ye Bark evades ye British by Nieu Yorck Bight.

13th May - Devilish poor weather does perclude a sea-voyage, ye Snauw swamp'd - Am much perpex'd how to proceed - a monstrous waterspout now in sight off Powles Hoek - at this rate nothing short of Devine Provenance shall deliver me in good time to Nieuw England with whole skin - Rot these French fancies, they may go to the devil for all I ...

...and so set down at Boston tho drenched & dizzy in a transport of delight.

14th May - Confound'd in my Expectation to intercept 'Ermine Knee', made Inquiry to find ye Frenchy Fregatt delop'd Down East a-nosin' about wair Saltonstall'd with not a word of our Cargo/ By ye Onion OysterHouse by chance made Acquaintance of Monty Golfer, another Frog come ashore with Fayette & his little dog too / Massacr'd a Lobster wash'd down with Maltster Adams courtesy of Miss Ewer's Specie - La Boil Alliance / Discover'd in him a  fellow Inventor tho a gasbag on his theoree of litter then air travel / on this head did infirm him of my own recent Experience of travail by vortex which he did deem Revolutionary / After drinking more on it have determin'd to Construct a Flying Maschine for ye Libertie of our Property.  In the current French fashion, Fool Monty does whist to honor Dr. Franklin by calling it 'Python' after his famous 'Jine or Dye' sarpynt howbeit I favor 'Albatross'. 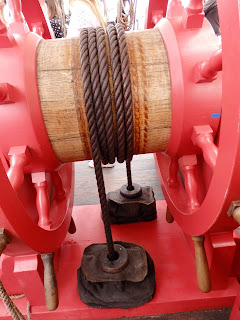 15th May -This Day began to amass Materiel for ye airship.   Did call at [Belcher's sister] Charitee's in ye North End, found her not within but her washing on ye line did seem admirably suited to our purpose tho regret she must make shift without/ Borrow'd a Bellows from the shop of a Paulo Riviera who does pretend something in the Tinker's line / Did Requisition a small watercraft beach'd by ye Common & curiously fashion'd in the shape of a noble Swan.

16th May - Our work proceeds / Did Consider a cup of Cheer at Malone's but 'Tis a little known fact ye tavern is much frequent'd by Regulars & ye likes of Howe and Frasier.

17th May - To day much troubl'd by idlers & loafers below as Monty Gopher does hold a Lottery ye Winner to have naming rights for our Contraption - 'Crispy Haddocks' as favour'd by sum was a Martyr of ye Massacer & 'Mahkey Mahk' mayhap be Bostonaise for Marquee Fayette.

18th May - This day we return'd to ye Common to prepare 'L'Wick'd Pissah' for her Maiden voyage.  Thair being no proper Ensign for Air Service did Libertate broad Blue pennant from green Wall by ye Fens inscrib'd AMERICAN LEAGUE CHAMPIGNONS to serve that porpoise / Alight'd in ye Swan Boat with Brazier lit & set to ye bellows to inflate Sister Charitee's shifts / Unhappily Mounty Gulper's dog 'Fifi' espy'd one ally cat & was off like a Shot with Monsour close behind while I in 'Wick'd Pissah 'did rise aloft / He did beseech me most pitifully come back but ye dam'd fool knows full well he alone does understand ye principles of Aeronautical navigation & now may click his heels to get home while I discover I am in Boston no longer. 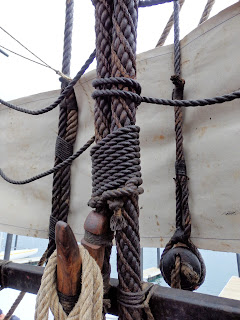 19th May - This Day am over Cape Cod, which from above does indeed seem like a mussel'd arm / Would that I had Maj. [Joseph] Bloomfield's old horse & a bushell of green pippens for fuel as such Internal Combustion served so well in '77 to speed our crossing  to Staatan Island.

20th May - Salvation, for ye small Anchor that does hang beneath has foul'd in ye rigging of a mighty Ship of the Line.  Unhappily she flies British Colours & makes as I now can see full speed down Long Island Sound for occupied Nieu Yorck / Small hope that ye white colour of ye inflate'd shifts & swan boat shall seem to those below but a scudding cloud, or yet an Albatross that all mariners know is perilous  to slay.

21st May - Marines, it does seem, know little of seamen's superstition, for they have won ye anchor, my cable cut ye swan boat peppered with shot & am now falling off astern; on approach to ye Water did cut free ye Swan Boat & paddl'd or rather peddl'd ashore at Setauket, deep in Toryland/

22nd May - This day secret'd myself in a Whaleboat & am Smuggled to New Ark by one Woodhull who tho not a Magistrate does call himself 'Culprit' but I do hold him blameless as a Friend of Libertie.

24th May - To Day reached New Ark wair did learn ye French baggage did go with full escort before me & is already in Mo-Town.  Now that I have return'd to Jarzy, 'Hoar Moany' Monty Guildford & 'Wick'd Pissah'  do seem to me now to have been but a dream /  Now to make my report to Majr. Ogden - Cosen Aaron, there's no place like home. 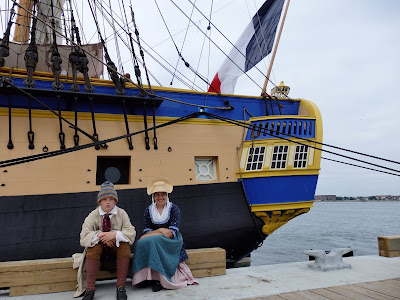 Posted by Tim Abbott at 4:23 AM No comments: