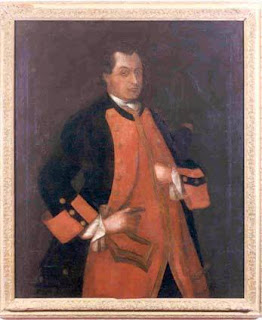 Our beloved 18th century reenacting hobby suffers from regular eruptions of vitriol and resentment over standards of authenticity, inflamed by  our values-laden perceptions of those whose impressions and motivations range from scrupulous adherence to surviving documentation to simply having a nice weekend outdoors in funny clothes.  I tend toward the "authenticity conscious" or "progressive" end of the continuum, tempered by the knowledge that documentation is limited and hypotheses are meant to be tested.  Also, a good sense of humor has gotten me out of tight spots on more than one occasion in this hobby, most notably the ill-advised “sausages of the Crown” incident of 2011 that launched a score of broadsheets, inspired a ballad and birthed a legend.


With that in mind, I am delighted to discover that Constant Belcher was himself, for brief a time at least, a "progressive" soldier in the 18th century.  In late 1774, when  Committees of Observation, Inspection, Correspondence and Safety were busy setting up shadow governments across the Colonies, while local trained bands drilled among the livestock on the Commons of New England, one company of Essex County militia in East Jersey appears to have decided to get into the act by going back to its roots.  In this, the earliest known entry in the Belcher Journal yet to have come to light, we discover the pains to which these patriots were willing to go for the sake of Liberty and Authenticity.


“Dec 13th [1774]  Thair be sum Gen’lmen of This Town afixin’ to re-ereate a Coy of Milisha in ye Manner of our Olde Jarzey Provincial Regt. from ye French War / As Father did Serve at Sabati Poont in ’57 wair ye Heathen did relief him his Topnot did think it proper to ‘List to remember his Sacrifice.


Dec 14th – To Day did attend ye Committee of Reenaction at Williamson’s Hogshead [Tavern] with a mind to jine ye new Provo Coy /  Much debate concerning what Impression to make, de Hart does favour  ’62 when the Blues got Yellowjack in Habana whilst Mayor [Ephraim] Tyrell spoke for ’57 when the Regt. was well scupper’ d in thair Batoos / As few old soldjers did survive these Campaigns but little Material culture does remain to inform Authentick uniforms  &etc. For my part Father did leave me naught but his Hoern as patrimony graven “Fools Such as We”/ Did offer this Relick to Committee for Inspection, directly they did attest its documentation for ye True Motto to be blazon’d upon  ye Colours.

Dec 15th  –  Ye Committee still debilitates ye Standards of Authenticity for ye Provo Coy/ Dr. Barnett did Procure certain Papers from ye Provincial Assembly from ’58 as did authorize short uniform coats “after the Highland Manner” /  Grate disputation re: such  Garmints as naught in our Number is of Scottish Descant tho’ sum are of Presbyterian stock / Subcommittee of Observation sent with dispatch to Nieu Yorck with divers Articles of a drafty nature to render from Life ye Trews & Coatees of any Highland Regt to be found among ye Ministerial Forces thair.

Dec 18th –  This Day did hear of a fine Portrait of Colo. Shirley in ye old Regimental of the Jarzy Provos at Spanktown & did travel thair as a Body to Authenticate / ‘Tis a faire likeness in Oyl of ye Olde Blue Uniform of madder Facd/  ye Skirts are over long for ’58 & ye Waste Coat too fine for Common use / Ye Coy mooted viz: yellow buttons Gas back or no / Returnd this Even. To Williamson’s to drink on it more.


Dec 29th – Still no Resolution, ye Committee makes no progression on ye Provo impression / Word has come from Phila.  of the Provincial resolves forNon Importation from Britain, Most distressing to Our Cause as ‘twill deprive us of ye proper K&P Broadcloth needed to clothe the Coy in Authentic Fashion.
Dec 3oth –  Drilld  To day in the olde manner/ Did Find it Bland.

Jan 2nd [1776] –  Treason of ye Blackest dye!  This Day Capt. Woodruff  did revile a disaffected person in our Coy who did contrary to Gen’l orders of ’58 refuse to cut down his Round Hat with Yellow tape for to go a-Campaigning, also did fashion Indian leggings of Brown broadcloth in place of Blue or Green as establishd in ye Documentation for our Impression.

Jan 6th – Took French Leave of the Re-created Jarzy Provo Coy, much fatigud by Research,  Have determin’d Soldjerin' must be ye proper Province of Scholars, not fools such as we."