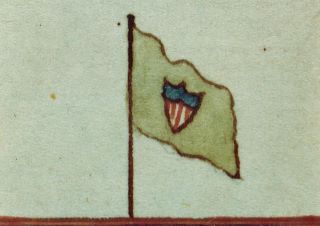 I was deep in research with my friend and fellow reenactor, Larry Schmidt,  trying to document the original color of the field of a regimental flag – he favors a minty green (which he claims is "refreshing"), while I am holding out for Jersey drab – when we made an extraordinary discovery.
We were visiting the Spanktown Society of Friends in Carteret, New Jersey.  We were ushered into a disused storeroom at the back of the building, the oldest part of this structure that Larry is convinced is all that remains of the historic Blazing Star Tavern from which you may recall Col. Ogden launched his raid against the loyalists on Staten Island in 1777.
We had come to view what we were told was an 18th century American haversack of soiled onsaberg linen on which someone had painted the shield of our regiment in an early American primitive style.  However, we could see right away that it was actually a grease stain that looked vaguely like a bearded man with undressed hair which is clearly not 18thcentury. While Larry is not unconvinced that it may in fact be a representation of Edward Hyde, Lord Cornbury, one of the colony's first royal governors who reputedly dressed in women's clothing to effect a likeness to his cousin, Queen Anne, I remain skeptical.
In any event, we were extremely disappointed to have followed another promising lead down a false trail, but then noticed a bundle of rags that at first we took for something even Adam Young might refuse to wear but which actually proved to be an old book wrapped in tow cloth.  What we found inside literally blew our minds.
It appears to be a journal, in appallingly poor handwriting, written by an enlisted man in my ancestor Colonel Ogden’s 1st New Jersey.  As you may know, anything written by enlisted men is rare enough from this period.  Aside from the 1776 diary of Timothy Tuttle, there is no other contemporary journal of its kind known from our regiment.  While it is very difficult to decipher, appears to have been written in a variety of natural inks, and has many loose pages all out of order, Larry and I have made enough progress to be able to say with certainty that the author is one Constant Belcher of Elizabethtown and that he was for a period the waiter or batman of my own direct ancestor, Brigade Major Aaron Ogden, the brother of Colonel Matthias Ogden!
Like Ogden, Belcher is an old Elizabeth New Jersey name, and The Belcher-Ogden House in Elizabeth, also known as the Governor Jonathan Belcher Mansion, is another intriguing connection between these families.  I had no idea that Maj. Ogden had a batman named Belcher, and never conceived that he might have left a journal of his experiences.  Larry and I promptly made a $10 contribution to the Spanktown Yearly Meeting and they let us take the tow cloth and its contents.
We are now busily trying to decipher and transcribe the Journal of Constant Belcher and prepare it for scholarly publication.  It is hard going, but each of us has taken sections and we will share the results with you as we have them.  We have decided to add punctuation where needed for clarity, but otherwise to leave the entries as Belcher wrote them.

I am so excited by this discovery.  Larry and I feel it will absolutely change our understanding of the Revolution from the common man's perspective, and is likely to get a few noses out of joint on RevList.  We won't have to throw way our Pickering's Tools anymore as inauthentic, for one thing, as you will see.