Constant Belcher and the Legend of Molly Pitcher 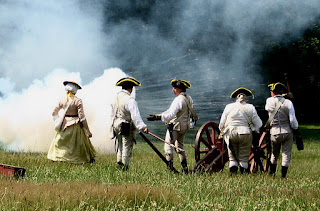 It has taken me several months to piece together the fragmentary record of the Battle of Monmouth recorded in Constant Belcher's Journal.  When Larry Schmidt and I divided up the loose leaves of the Belcher document, he was particularly interested in those sections that mentioned the regimental colors of the 1st NJ Regt. to which Belcher belonged, as none survive today and there is much speculation as to what they may have looked like and when during the war they were carried.

I share his interest in this topic, but was also keen to see whether Belcher had anything new to say about the Monmouth campaign in which he was a participant.  It turns out that his Journal entries for the Battle of Monmouth that Larry and I have been transcribing not only include new evidence about the fate, if not the design, of the regimental flag, but also reveal that Belcher has a central, if unwitting role in the creation of the Molly Pitcher legend.

"Jun 23rd -  To Day we marcht In light order without baggage / pull’d up the bords over Crosswicks Crk / soon thair came sum  Engineers to put them back agin with some Green dragoons,  Highlanders,   lt. infantry also 3 small pieces lit artillery /Gave us a brisk fire but had trifling loss, save one militiaman and Col. Dayton’s horse.  We annoy'd them ourselves and drop't one officer with the Lights before leaving them to thair work. 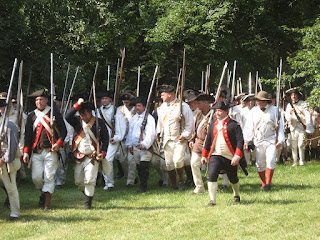 Jun 24th - Took up the Bridge at Docktor’s Crk /  to Day much as before we swarmd  in front of Enimy advance with Militia / afternoon excessive warm, not slightest breeze to temper the march.
Jun 25th - This day on left flank of Ministerial army  / such heat as Parson C[aldwell?] warns Hellfire to be / my sory Mount having  succumbd  to the Infernal wether did  replace  her with a Spavined mule / Maj Ogden  much amus d  at this an being much a-given to High oratory, did declaim him ‘the Dappled one’ and myself also named Sancho to his Donkey Hoe Cake/  Doubtless Cozen Aaron, being a College boy, is sensible to the meanin of this but I can make No thing of it, unless he Desires me to cook for him this mule in the Spanish fashion with fire cake / an it be so he can wish away for I'll not tag-rag by his stirrup whilst he gallops hither and Yon.  Campt this Night at Risin Sun Tavern an still so hot it feels the sun never Sett.
Jun 26th - Skirmishd this Day with Jaegers an Rangers  / vry rainy an Sharp lightnin and thunder overnight /  Maxwell's and Wayne's Brigades ordered up to Genl Lee who succeeds to the Division of Mr. Fayette the Frog-lander who stood with us at Brandywine.
Jun 27th  - Marcht this Day to jine Genl Lee with Fayette’s division.  The Invader stays in place and his baggage thot to be a-danglin in his rear /   Our new position on left and nearer to Englishtown / At Noon Cookd  2 day’s rations /  Did attend Maj. Ogden at council of War /   Genl Lee instruct d to attack rear of Enimy in morning /  Maxwell did afterward say to Maj. Howell [of 2nd NJ] ‘very well for you we will have a hot fight tomorrow’ in answer to request  that he go to Black Horse tavern to see his brother thot to be dying /   Night very hot no breeze. 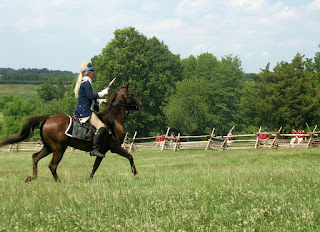 Jun 28th - Such a day as I scarce hope ever to see Agin / Maxwell did receive orders to prepare to March at 5 but Genl Lee did not begin until 7 by the Clock / Much marchin an counter marchin before abt 2 miles East of court House came at last into open field in full view of court house with the Eminy to our front / Halted with morass on right flank and dense thicket on left /  Here Col. Rhea [of the 4th NJ] being something advanced of our position did engage in a Duel with a Dragoon but, having missd  his shot and not having a sword was compelld to make a Hasty withdrawl through a barn with the other in Hot Pursuit / Tho near 100 muskets of the Jersey Line did fire upon the other as they past through the other side nary a one found a mark, which sad to say shows the quality of the many new recruits in our Ranks / The fightin Commensd with some roundshot passing here an thair until Genl Scott came up to say the Enimy had past on his right and was now in the rear and our men were seen to withdraw on the far side but no orders did come from Genl Lee /  Maxwell and he did agree to send our guns back over the Causeway and soon the withdrawal was seen to be general and all much disordered . 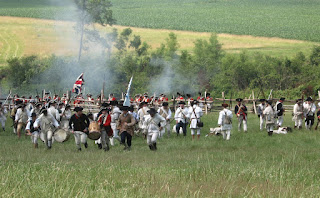 At this time came 2 from His Excellency asking the reason for the Retreat /  Cosen Matt Ogden [ of the 1stNJ] did reply most warmly that they were flying from a shadow /  Then came Genl Washington Himself and none could give the reason for the retreat /  He berated Genl Lee in most singular terms, and I noted a few Choice phrases that may see good service when next I go a-mule skinnin.
In the confusion, it seems that the Ensign of Col. Ogden's rigiment had gone astray an with him the colours /  Cosen Matt was most irate an Maj Ogden did order me back up the column to locate them /  The Enimy by this time was pressing most closely an our men in the cause way over the morass wair all in disorder / I did see several men dropt down from the Heat an whilst searchin them for our Ensign found them dry and cold to the touch / I hid in the mire as some Grenadiers past by an then saw our own banner cast aside hard by the roadside / it being too much to carry the pole I tyed it about my waist and skirted the Enimy to rejoin my fellows / 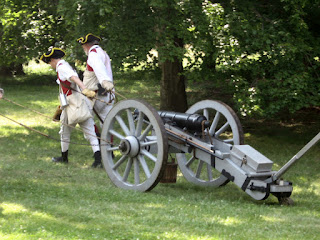 Coming through a field I found Some of Proctor's guns playing smartly with the Enimy in an orchard behind me / Col. Proctor did order me to serve as Matross as he was then shorthanded / A roundshot came so close to me as to pass between my legs  and tho it spared me it tore the colours all to shreds/ A gunner did remark on my good luck an I said in return I was lucky it did not pass a little higher, for in that case it might have carried away something else/  He told me I was a brave lass, which I did think strange but then it was a hot day an Too warm to think straight /  Have heard since that one of the women of the Army served Proctor's guns at Monmouth but I think this just a soldier fancy for I was thair an did not observe her.
Posted by Tim Abbott at 12:40 PM