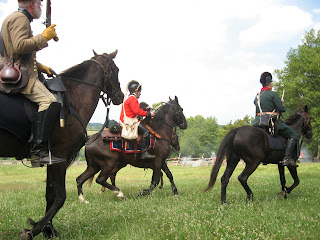 In early Spring, 1779, Colonel Matthias Ogden of the 1st New Jersey regiment found himself in considerable hot water.  One of his officers, Captain Isaac Morrison, brought court martial charges against him, listed as follows in General Orders:

Washington considered these accusations to be “of a very high nature”, and a number of other officers who had served under Ogden were called to give witness.  After several weeks deliberation, a verdict was returned that acquitted the Colonel of the first three charges (the third with honor) but found him guilty of the last.  This was a violation of Washington’s standing orders against gambling, which the Commander in chief considered “the most pernicious Vice that can obtain in an Army.”

There was a thorough scolding in General Orders, after which the chastized Colonel was returned to his duty.  After all, he was something of a favorite of Washington’s, a valuable intelligence officer and brave commander whose services would soon be needed for the planned campaign that summer against the Iroquois.

The same cannot be said for a number of those who gave testimony at Colonel Ogden’s court martial.  Several of these men transferred from the regiment or left the army, and one – Ensign Asher Levy, the only Jewish officer known to have served in the Jersey Line – was imprisoned under suspicion of being a Loyalist and later escaped to New York.

There was one witness, however, who was in all likelihood not hostile to the Colonel (though his testimony may have been the most damning).  This was former militia Brigadier General Matthias Williamson, who like Ogden was from a respected Elizabethtown, NJ family and part of the same social set.  I have often wondered whether it was he, a gentleman not subject to military discipline, who may have admitted at trial to playing what he considered a harmless game of chance with the Colonel, but there is no transcript available of the court martial proceedings, aside from its outcome.

One section of Belcher Journal, however, does provide tantalizing clues about the nature of the gambling debt that the Colonel incurred, and how he managed to settle them, as well as new insight into what got Captain Morrison's breeches all in a twist.  As usual, Belcher plays a prominent, though unwitting part in what transpires.
"[Febr. 13th 1779] – This Day Colo. Ogden dined with Gen’l Maxwell & Maj. [Aaron] Ogden at Williamson’s in Eliza. Town / did Serve at table whilst ye Gentle men convers’d on divers matters - all agree ye Prospect of our Neighbours the British at Stataan [Island] causing Mischief most likely.

Colo. Ogden spoke exceedin’ fond of his stallion -  Major Gen’l so called - 7/8 blooded sixteen hands high & as well made as any horse in this state / Gen’l Williams’n did propose a wager ‘gainst his own Irish Horse– Skewball by name – to run 3 two mile heats ye length of Broad street to Stone Bridge & back, ye stakes to be these same Beasts / Colo. Ogden did blinch at ye High nature of the Purs but agree’d as a man of honor / Maj. Ogden bid me ride Jockey for his brother, which I thot hard service as little Billy Shoemaker of Meeker’s Troop rides for Williamson.

[Febr. 14th 1779] Ye terms are set, each Hors to carry 9 stone, Shoemaker did way in at under Eight & I being sumwot over wait need be strip’t to small cloaths only & puk’d Till  a most Hollow Jockey / A number of persons with ye Army put up side wagers tho’ gaming ‘gainst regulation.

Maj. Gen’l had ye lead thru two courses but hard by ye Bridge at ye last turn came all a crupper over  Capt. Morrison having just posted guard to that Place / this Gentle man wuz compell’d by our passage to redeploy with sum haste into ye River to his grate discomfit & Mortification.   Did spur with zeal to overtake Williamson’s nag but all for naught as Skewball come aprancin’ & adancin’ across ye Line.

[Febr. 26th 1779] This day did hear Colo. Ogden to be charg’d at Court Martial for what I know not by sum sor-head Gentlemen of ye Battalion.

[Apr. 2nd 1779] Gen’l Washing’n did take ye Colonel to ye Woodshed in Gen’l orders this Day for gaming – certain ‘twill fair wors for those as made fals claim at Tryal.

[Apr. 17th 1779] To day ye papers do report Will Cover This Season at Eliza. Town ye noted hors MAJ. GEN’L Late ye property of Col. Matthias Ogden, at forty dollars ye season, or 20 the single leap, ye money to be paid at ye stable door, at the first covering of ye mare / Ye losin’ of his fine Stallion must grieve ye Colo. full Sore, but to know pimp Shomaker gets a dollar every toss, it grieves me ten times more."
Posted by Tim Abbott at 10:55 AM