Belcher on the Declaration 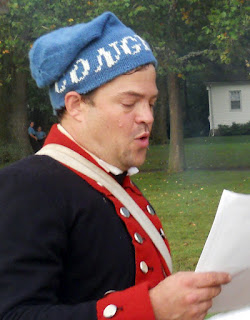 It is unlikely that there were many in New Jersey who were aware on July 2nd the Continental Congress in Philadelphia had voted for Independence.  New Jersey's own Third Provincial Congress, meeting in a Burlington tavern, were busy adopting a state constitution on that same date that staunchly proclaimed all civil authority of the King over the colonies to be at an end, but also included the disclaimer:

"Provided...that if a reconciliation between Great-Britain and the Colonies should take place, and the latter be taken again under the protection and government of the crown of Britain, this Charter shall be null and void - otherwise to remain firm and inviolable."

With the Ministerial Juggernaut gathering on Staten Island and poised to strike New York and the Middle Colonies, this may have been more a matter of prudence than evidence of less than patriotic sentiment on the part of the framers of New Jersey's constitution.

Constant Belcher's Journal entries for that week show that he was likewise both politically aware and concerned with more practical matters.

2nd July [1776]    "this Day did go to the Point in the forenoon at ebb tide for a frolic with Mrs. Ireland that is cook to Rev. C [aldwell] / Pass d a most pleasant Hour at Chicken neckin'  / a Prodigious rain commensd at the Flood whilst engagd  filling her oyster basket.

3rd July                Some of our People are come from Staaten I[sland] with devilish news the forces of Tyranny are disembarkd  the militia at Richmond-town all turnd Tory.

7th July               Came over to New Yorck / saw the Ministerial Shipping in the LowerBay thick by the Watering Place / Streets abound with Yankees all stopd  with Breast works /   Joyous news that Congress at Phila. Have Proclaimd  an Independency /  Went to a Publick house to give joy to our Libertie/  the owner, one Braisted of Bergen, a Notorious Tory being returnd to that place we had the Libertie of the Property.

9th July                This day the New-York Provincial Council  did print broadsides of the late Declaration of Congress /  Joined a Flash-Mob hard by the Fort at Bowling-Green to pull the Leaden George from his horse for musquet Balls / King Sears and his Sons of Libertie did appear most Zealous to apprehend the Leaf that gilt the lead."